Ultra-Modern Dental Education Centre at the University of Pécs!

Ultra-modern, 21st century dental care and dental education/research is made possible by the Dental Education Centre, which was inaugurated on 3 March. 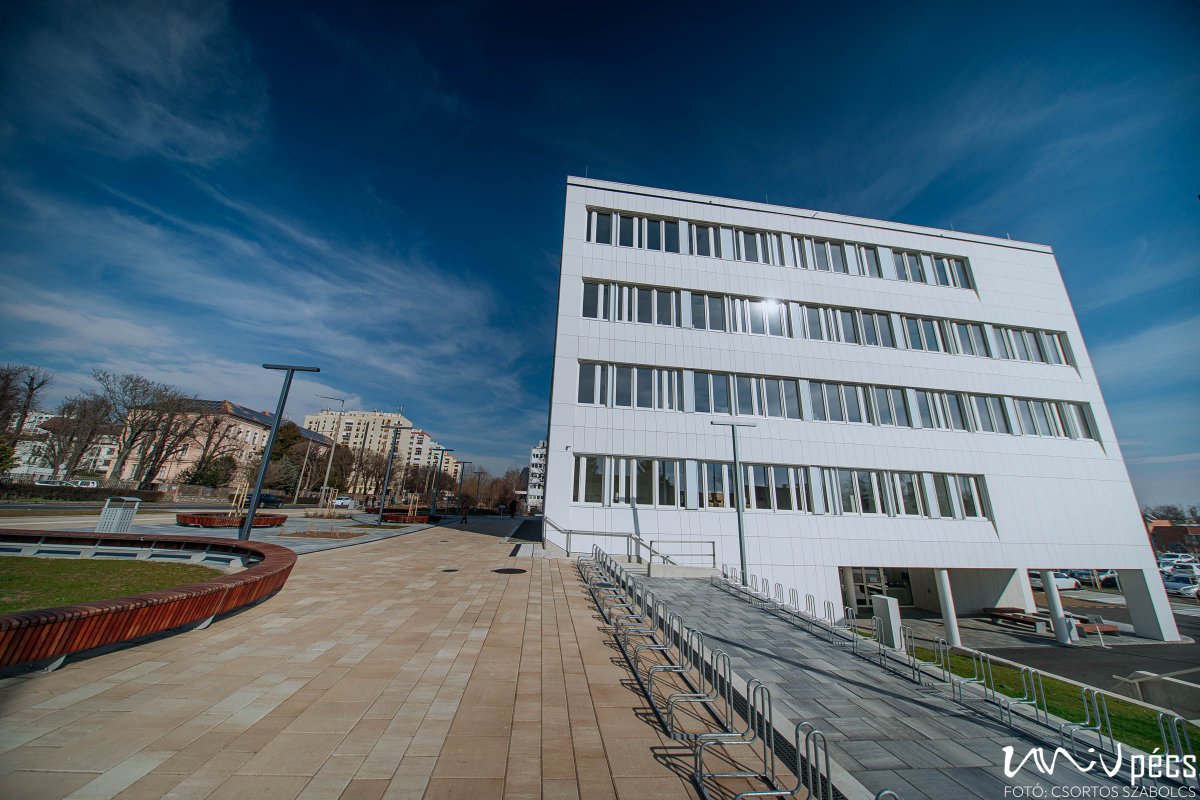 The gleaming white multi-storey block stands on Szigeti road, opposite the Medical School, University of Pécs on the site of the former Lakits barracks - the history of the ill-fated barracks is commemorated in the centre's interior.

The five-storey building, which covers almost 3,000 square metres, houses the entire spectrum of dental care and training. The backbone of dental training is provided by more than 60 state-of-the-art dental workstations,

in a circular panoramic layout, surrounding the central corridor and patient lounge on each floor. The new centre will provide theoretical and practical training for 600 students, with student, research, teaching and administrative space on the upper floors. 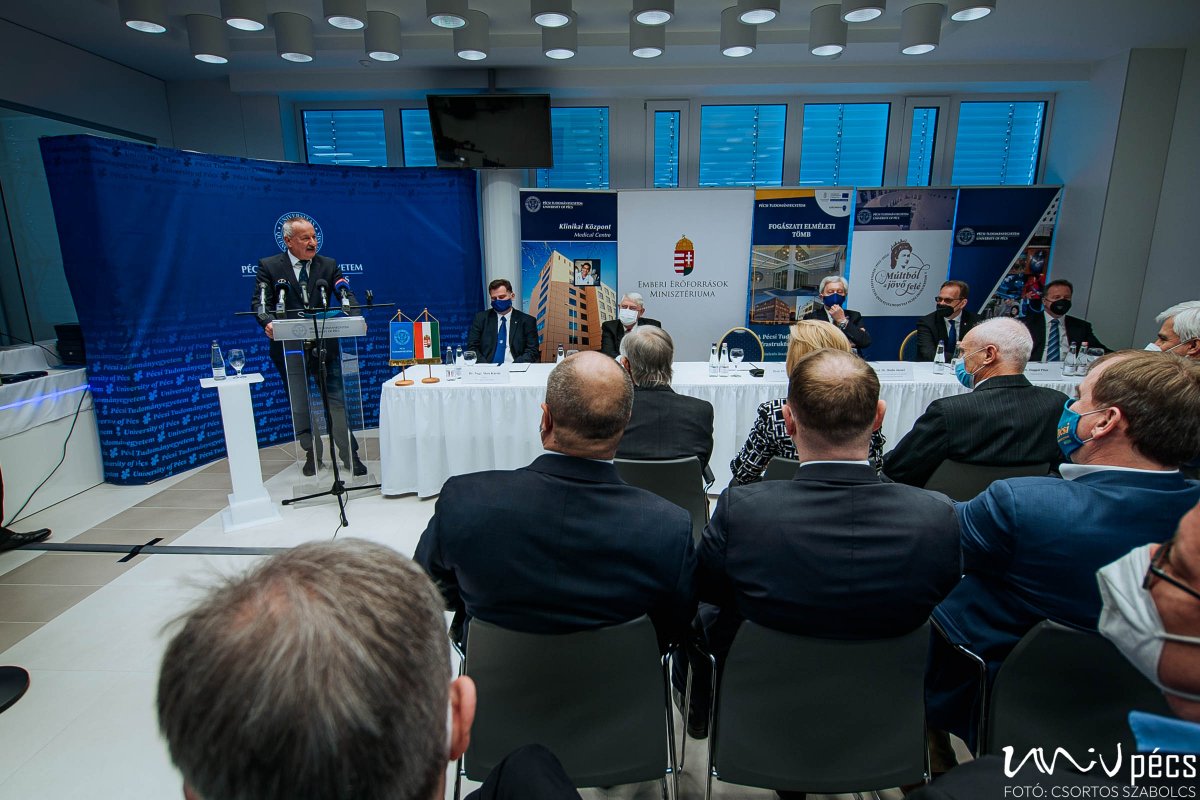 For the international and Hungarian students, the communal space will be a panoramic terrace, which will be surrounded by crimson LED lighting at night. This is an important milestone for the city and the region, around 46 000 patients are going to be treated here each year. The new facility will be easily accessible on foot, by public transport and by bicycle, and will also have a public car park to facilitate car traffic.

"Today is a fantastic occasion, especially when I think that we have been thinking for ten years about how to acquire this area for medical training."

- Attila Miseta, Rector of UP recalled the atmosphere of the once rubber-boot-clad field trip, thanking all those who contributed to the success of the long process. 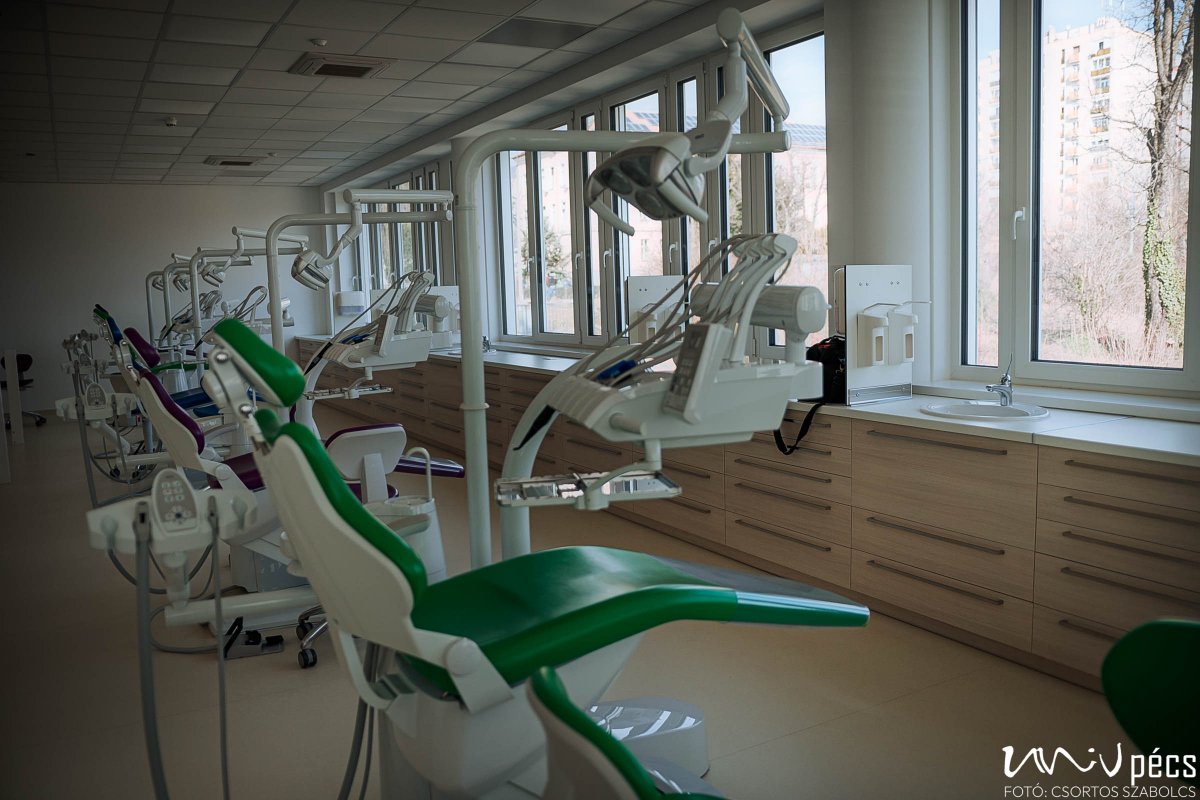 "The future starts in the past", said Miklós Kásler, Minister of Human Resources, who not only recalled the development of the Reproductive Methodology Clinic and the foundation stone-laying ceremony of the Reproductive Methodology Research Centre the previous week, but also spoke at length about the historical events that led to the establishment of a university in Pécs, and the related cutting-edge health services and research in the present. The University of Pécs attaches particular importance to its centenary, which celebrates the fact that 100 years ago the Elizabeth University moved from Bratislava to Pécs, and the city, which was the first in Hungary to have a university, became once again the home of a higher education institution.

The independent dental school in Pécs opened its doors in 1975, in the building on Dischka Győző street. "At that time, this was a great step forward both in terms of infrastructure and spirit", emphasized József Bódis, state secretary, and added: "The foundations were laid for a development in which the dental education in Pécs could demonstrate its quality and, with the start of foreign language study programmes, could also shine on the international market." The building on Dischka street was able to accommodate 100-120 students, but the number of students has since quintupled. The State Secretary did not hide the idea of the Pécs dental school becoming independent. "I believe that by taking advantage of the opportunities offered by the change of model, and although in tandem with the Medical School, they can now develop more independently," said József Bódis, who also highlighted the help provided by Zoltán Jenei, former chancellor of UP and currently Director General of the National Hospital, in the development of the new model. 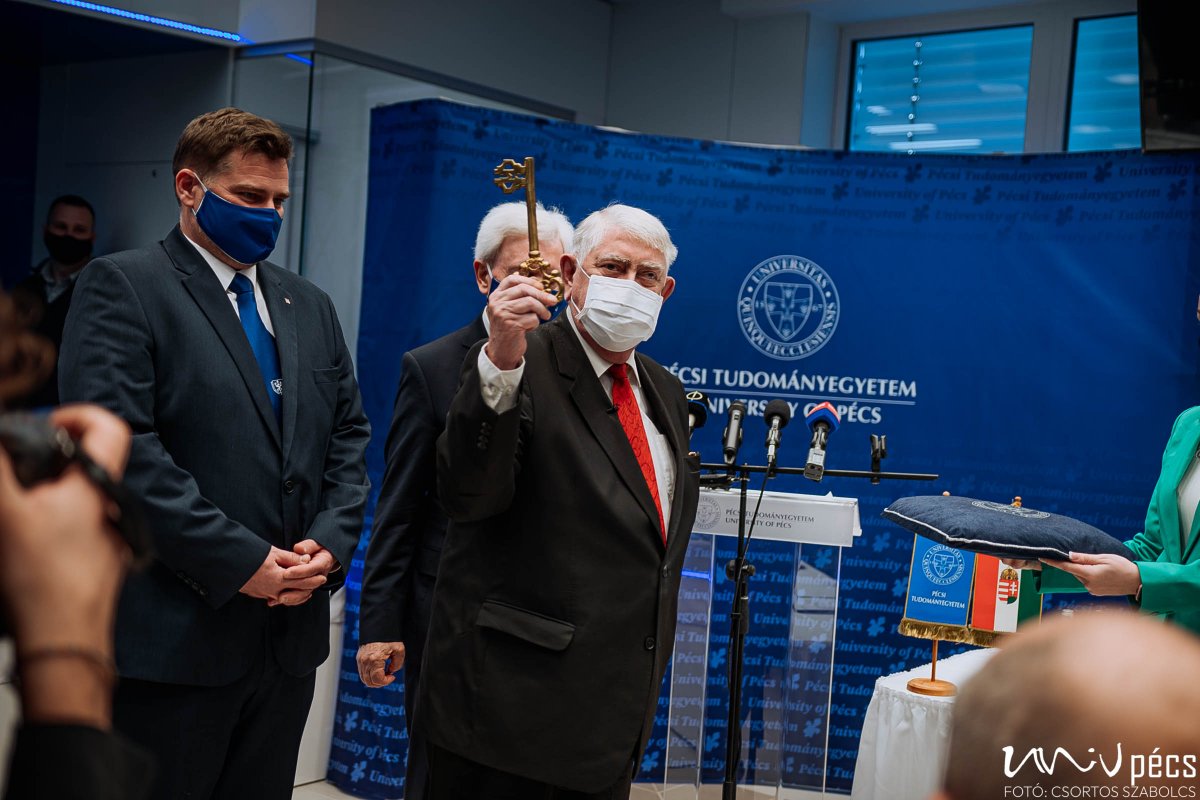 "This is real success, which raises the prestige of medical education in Pécs and confirms that it has become an important factor on the European higher education market."

- highlighted József Bódis, then referring to the current context added: "The pandemic is slowing down, but the virus is with us, and last week the horror broke out in our neighbourhood. I know how quickly the university responded to the latter, and I thank the university and its citizens for the positive attitude of perseverance, humanity and solidarity shown in these times of emergency." 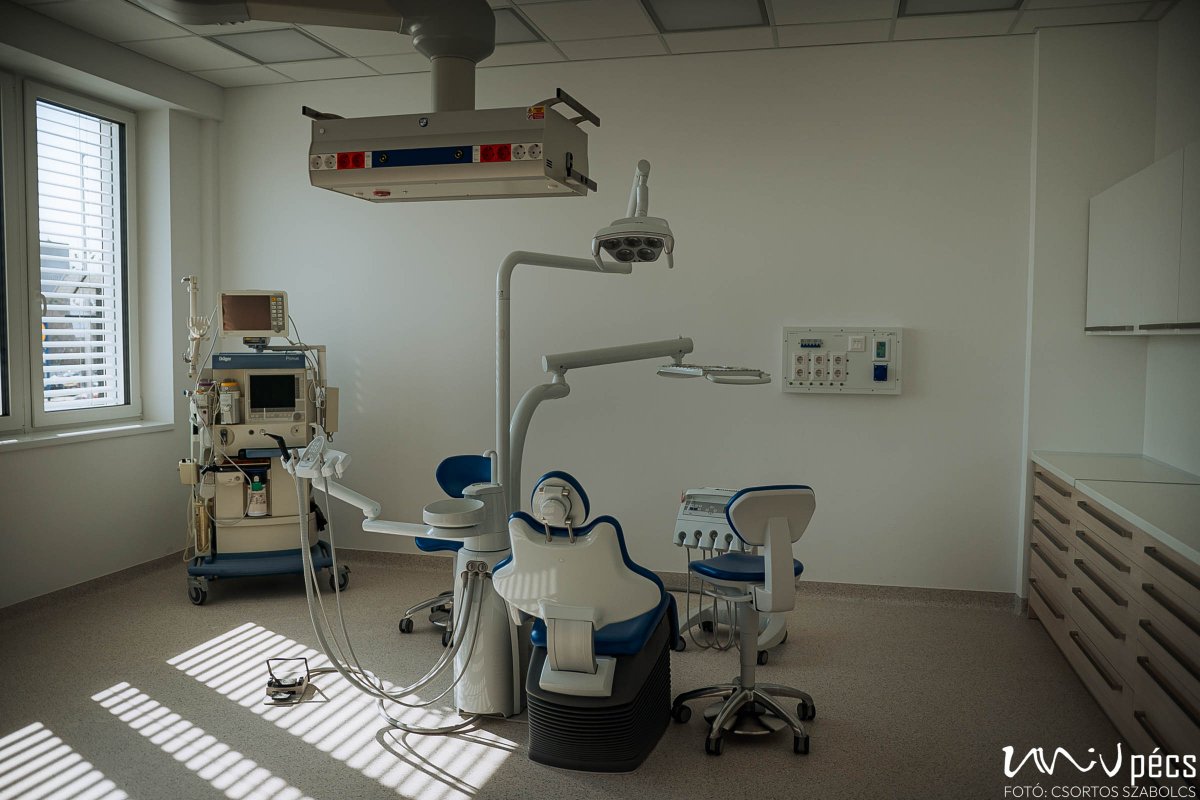 Dr. Ákos Károly Nagy, Director of the Department of Dentistry, Oral and Maxillofacial Surgery of the UP Clinical Centre, said in connection with the new centre: “Thanks to the investment, the new building will allow for the use of a new, fully equipped workshop with up to 70 new units.

By modernising the educational environment of the highly practice-oriented dental training and creating an infrastructure environment that supports the learning of students, the quality of training of dental students and specialists, as well as the lifelong training of specialists, will be significantly improved"- stressed the director.

The start of dental training in Pécs can be traced back to professor Pál Oravecz, who began laying the foundations in 1937. On the afternoon of 10 April 1937, the then appointed lecturer gave his first lecture on comparative dental anatomy in the auditorium of the Surgery Clinic. 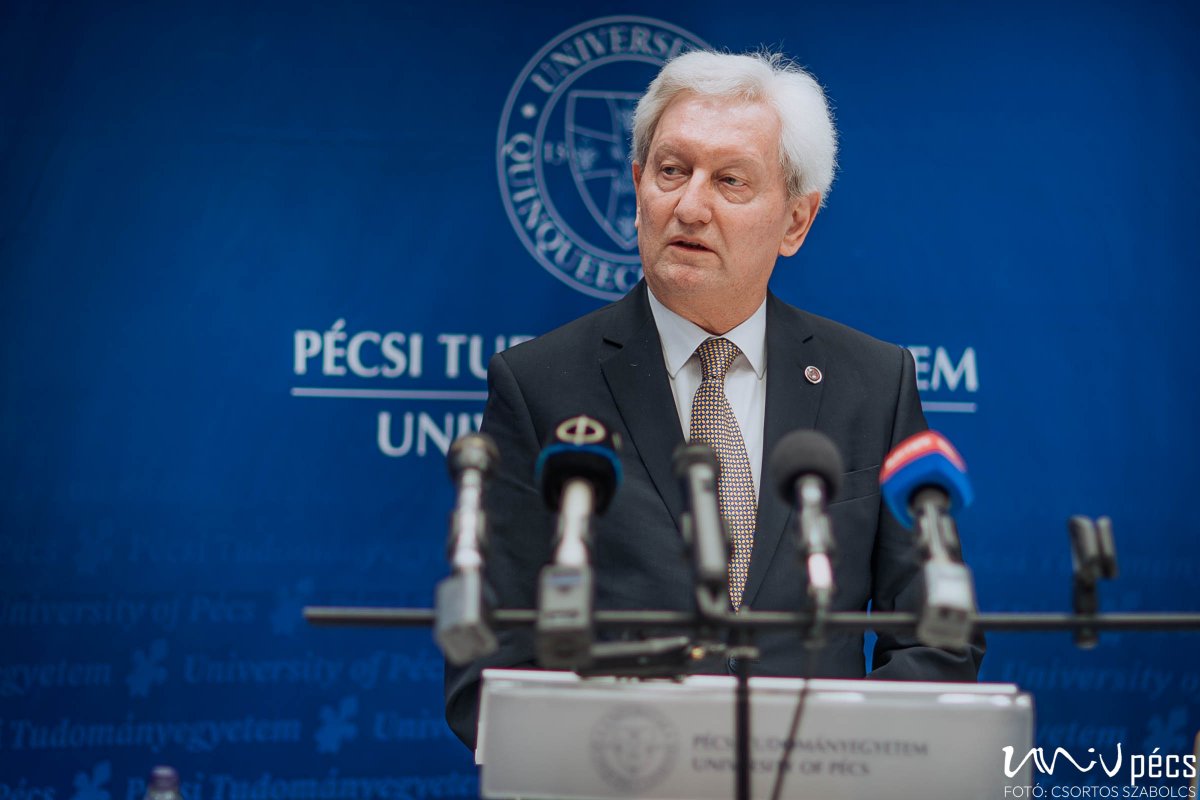 In honour of the former figure of dental education in Pécs, the Medical School UP founded a commemorative medal. The award is given to those who have done a lot for the dental education in Pécs. The medals were awarded for the first time at a ceremony at the Dental Education Centre. The awards were presented by Tamás Tényi, Deputy Dean of UPMS and Katalin Nagy (Association of Hungarian Dentists).

The Dental Education Centre of the University of Pécs will be fully operational from summer 2022.