Dr. Adrienn Fekete, assistant professor at the Department of Applied Linguistics, Institute of English Studies, Faculty of Humanities and Social Sciences, is the main organizer of Intercultural Encounters. We asked her about the unique event. 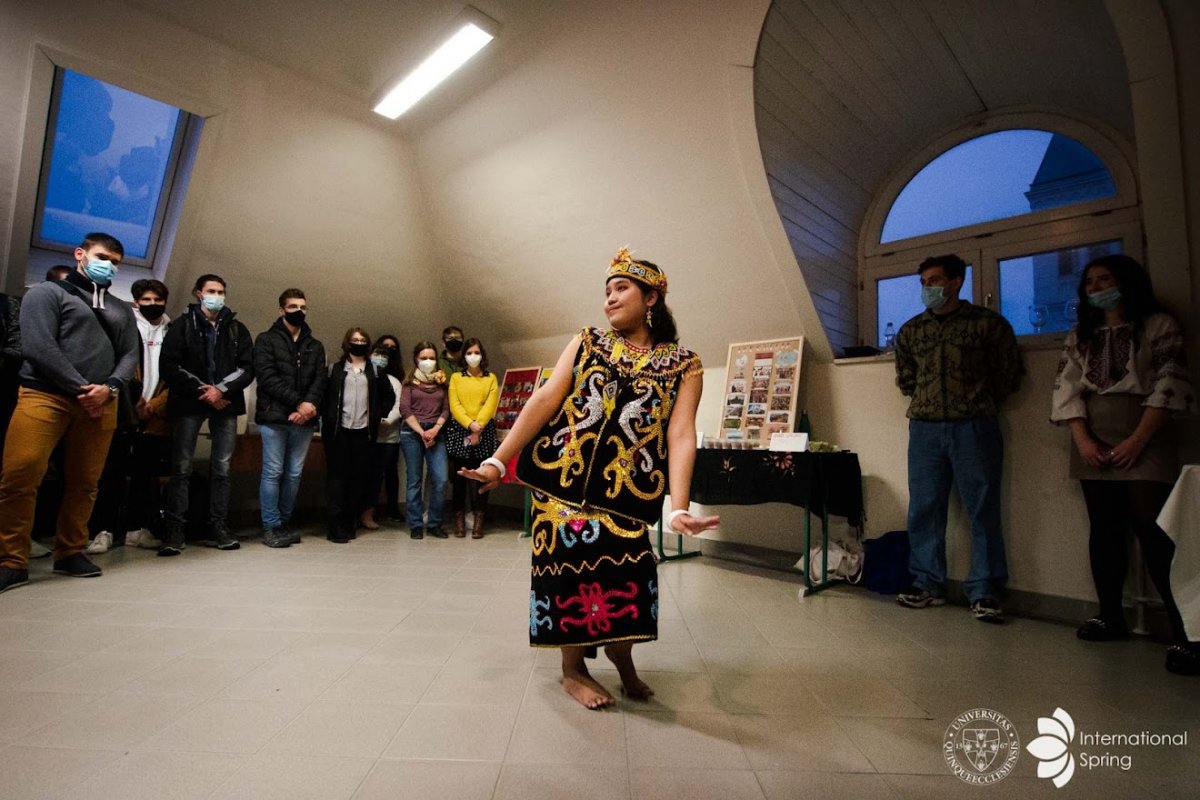 How did you get in touch with the international students you involved in the event?

I consider myself very lucky, because both Hungarian and international students attend my Intercultural Communication class, so we get to practice and study intercultural communication, which makes learning enjoyable and practical for everyone. This semester, I had Indonesian, Ukrainian, Hungarian, Spanish and Bosnian students in my class, so the Intercultural Encounters - Interactive Exhibition and Intercultural Event, which was organised based on the course, provided the opportunity to meet these cultures. 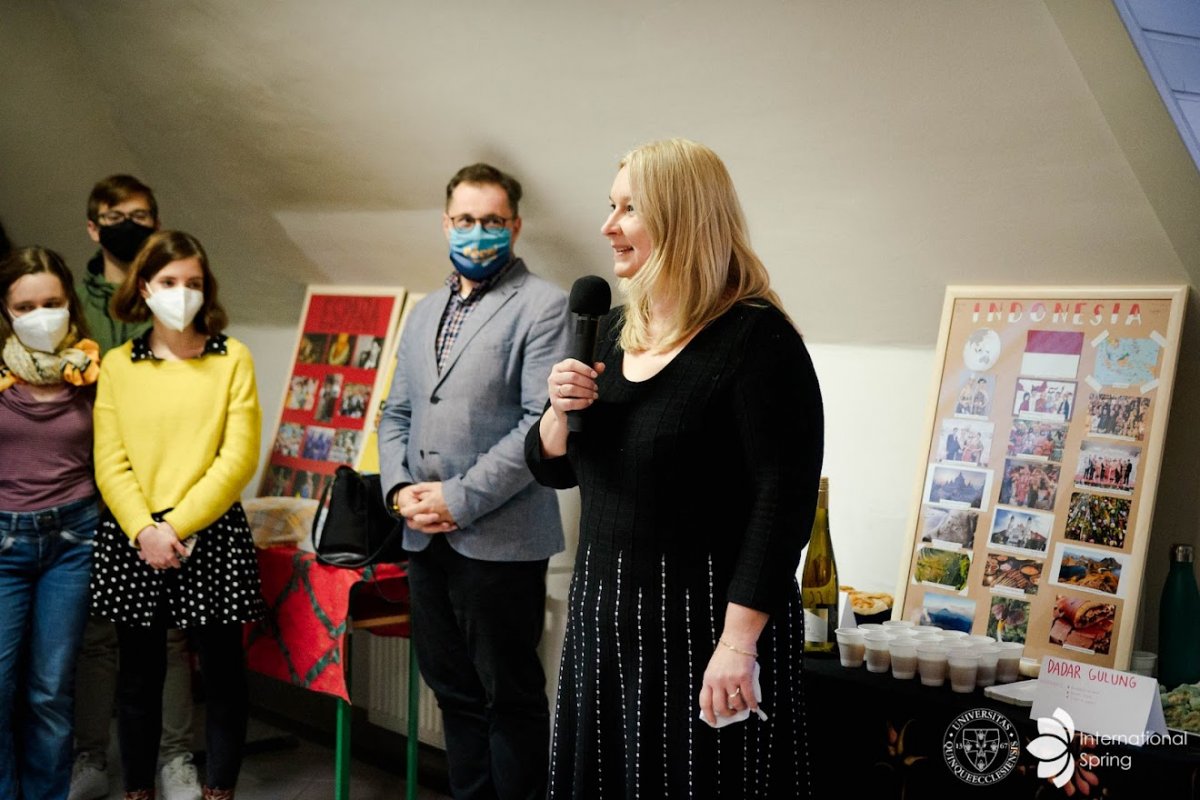 Where did the idea for such an event come from?

The event was inspired by two sources. When I meet new students, I like to get to know them better through "ice-breaking" exercises and thus create a relaxed atmosphere. During the first class, several students introduced themselves as creative, so I wanted to start the course with a creative task. I asked students from different cultures to create a cultural collage of their own country, which they would present in two minutes in the next class. A week later, the Indonesian students came to class with a huge poster that served as an inspiration for the other students. Soon, representatives from each nation had created their own cultural posters, some even more. The pictures were so beautiful that I could not let them gather dust in my office, so I started to organise an exhibition.

Another source of inspiration was the processes I experienced in class. The students showed a great interest in each other's cultures, asked numerous questions, and we often even talked about the cultural processes discussed in class during the break. It is rare, that students do not leave for a break at the end of the lesson, but continue to talk with sparkling eyes. This was a special experience for me too. 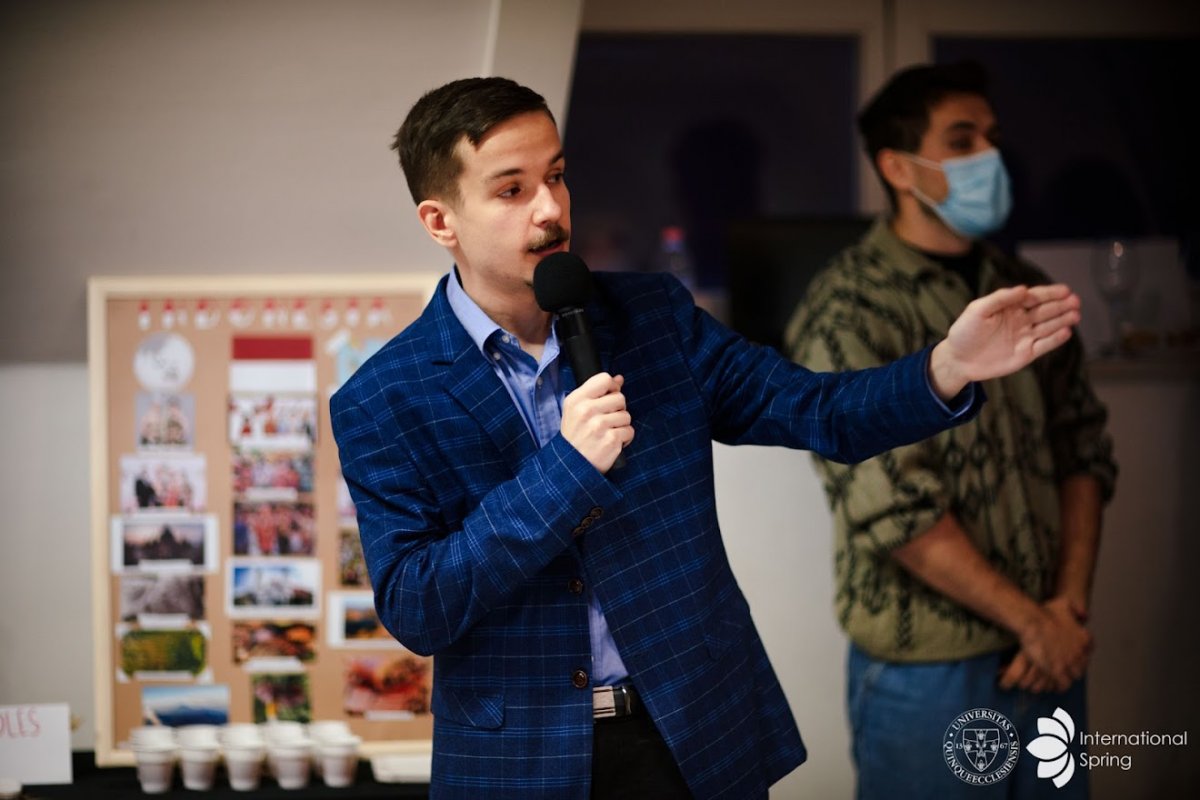 Was it your idea?

It was a joint initiative and a joint effort with the students. I gave them an exercise or an idea and they responded very positively. First, it was just a collage, then we thought about an exhibition, and finally it became an interactive, intercultural event with a cultural show, national food, national music and intercultural interactions.

What was the aim of the programme?

Despite the fact that students majoring in English speak the language very well, they rarely come into contact with international students during their studies, as foreign students only attend BA and MA courses. So, although they could communicate, it does not happen. On the other hand, there is also the phenomenon of international students forming their own community with their compatriots. Thus, despite studying at UP, they live their daily lives in isolation from Hungarian students. In my course, however, the rapprochement and friendship between the two groups started very nicely. The organisation of the event and the time spent together outside of class brought the Hungarian and foreign students even closer together. I wanted to extend these processes to the guests of the event. My goal was to get Hungarian students studying English and foreign students studying English to interact with each other in an authentic life situation using English as lingua franca, and thus engage in intercultural communication. Representatives of other nationalities also attended the event, thus creating a multicultural atmosphere. 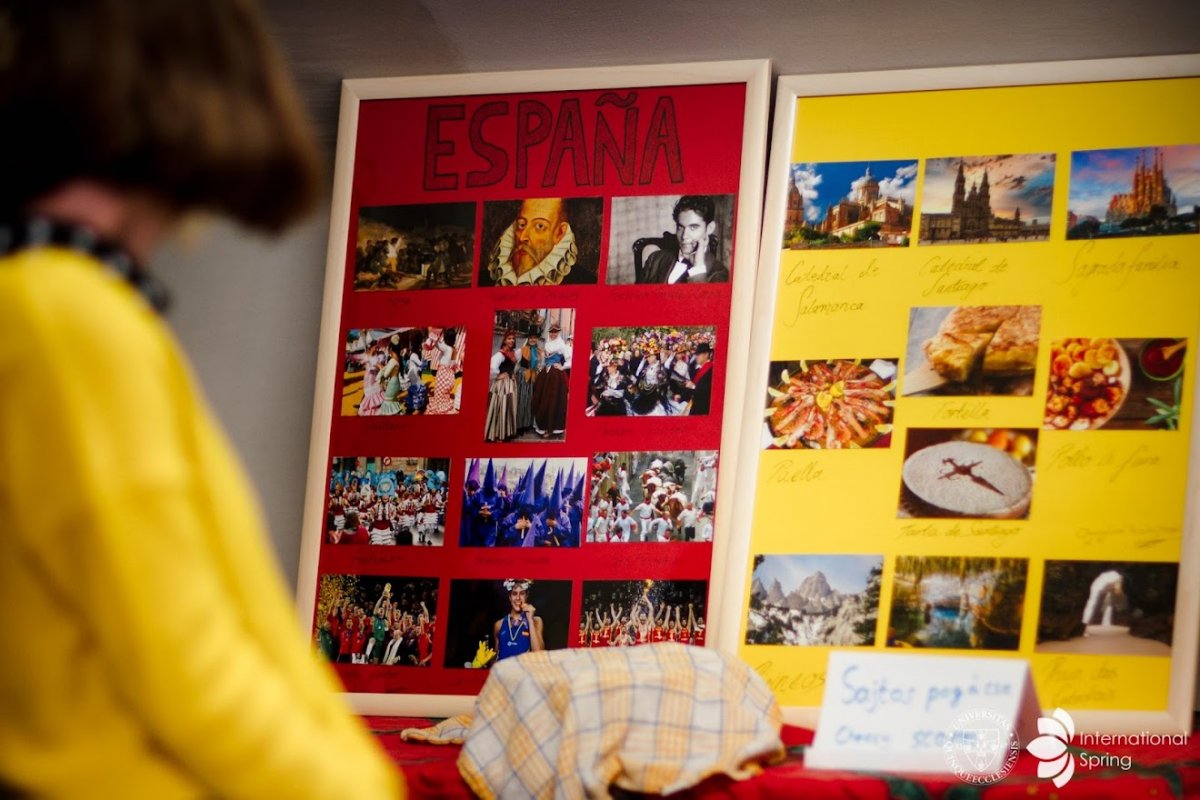 This was also the purpose of the different cultures being located in different corners of the exhibition space, where my students, as cultural ambassadors, offered guests national dishes and drinks prepared by their own cultures. So, as guests wandered around the space and viewed the images, they could ask the cultural ambassadors questions about the images and the food, or anything else that came to mind. This idea worked very well, with group discussions taking place in the cultural corners for hours afterwards, with Indonesian, Hungarian, Spanish, Ukrainian and Bosnian music playing in the background.

What were the students' tasks and roles; what did they do to prepare?

When I came up with the idea for the cultural programme, several people immediately volunteered. One of the Hungarian students, Áron Tüske, had been folk dancing for many years, and he performed a Székely dance. Roland Pócza performed two Hungarian folk songs. A Ukrainian student, Anastasiia Sichkar, performed a Ukrainian dance, and two Indonesian students, Hafifah Humaida and Dyah Aulia Nur Fadillah, each performed an Indonesian dance. Then, at the end of the show, the students briefly presented their cultural posters to the guests. 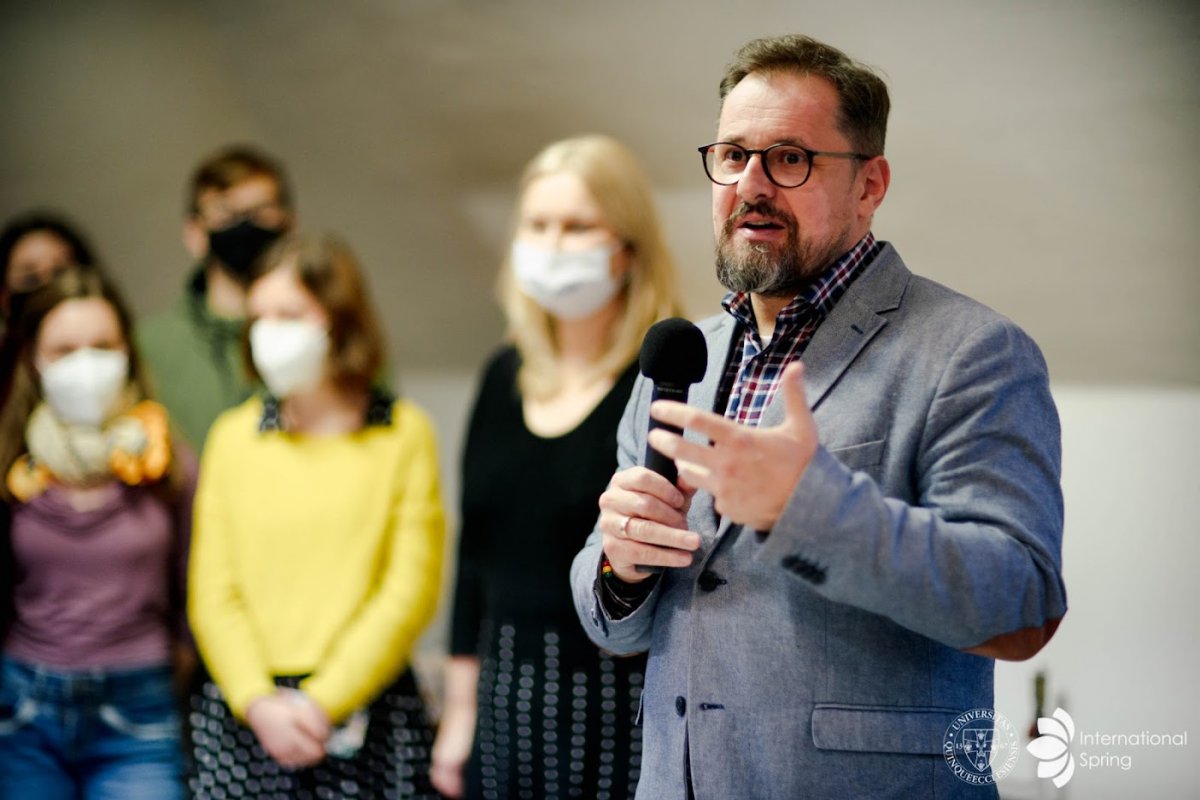 You also performed two songs in the show, where did the idea come from?

I felt that we were doing this together, so I thought it is important to play my part in it. Also, I wanted to set an example for the students: what I ask of them, I do that myself as well. They were very happy that I treated them as partners and that I was involved in the show, not just organising and managing the rehearsal process. We sang the first song, "Tavaszi Szél" (Spring Wind), a Csángó folk song, in duet with Roland Pócza, and at the end of the show I sang a song about patriotism in Hungarian and English from the film "The Sound of Music".

At the opening ceremony, you said that environmental protection and environmental awareness are important to you. How did this manifest itself at the event?

Yes, I wanted to set a "green" example with the event. All the food was vegetarian or vegan, and there were several selective bins in the exhibition space; also, food and drinks were served on porcelain plates and in glass cups at the buffet. With these small but thought-provoking steps, I wanted to raise awareness of the importance of environmentally conscious living. The opening of the exhibition and the programme was well attended, and I was pleased to see that there were students even one floor below me on the stairs. And for hours after the opening the students were talking, clearly motivated and having a good time. 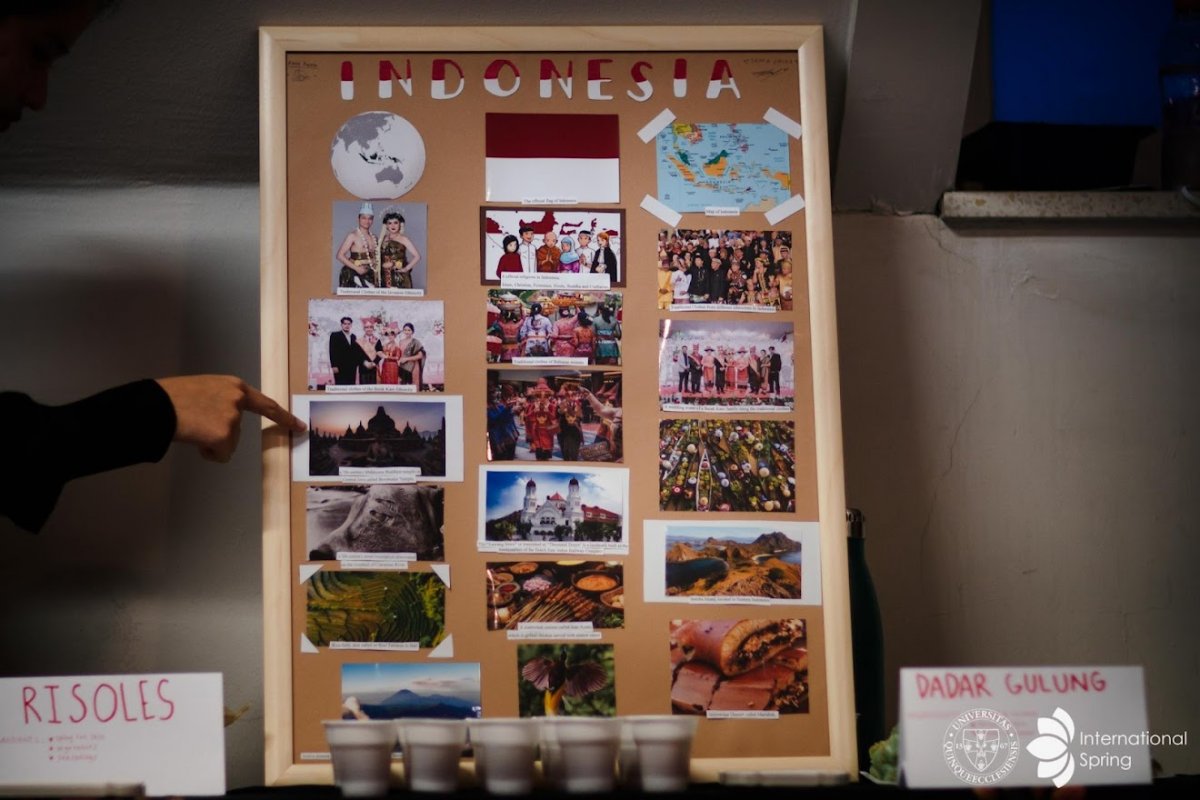 Did you expect such a success?

I hoped that many people would come. We prepared a lot of programmes, worked hard to make the shows and performances professional, and the event received a lot of publicity, so many people came to the event. We have received nothing but positive feedback, with students reporting that they really enjoyed it and would like to attend more events like this. It was a completely new initiative for the Institute of English Studies and for the Faculty of Humanities and Social Sciences. We wanted to liven up university life with this programme. I think we succeeded. My colleagues commented on how professional the programme and the organisation was. So many people came that if there will be another event like this, it will have to take place in a bigger venue.

Where did you get help and support for the programme?

I got a lot of help and support from the International Centre. With their support, we were able to organise the event to an even higher standard. They organised superb catering for us, serving sandwiches, traditional Hungarian pastries and Hungarian wines. By the end of the event, all the food and drinks were gone, both in the buffet and in the cultural corners. We also had technical support: we had a professional sound system and colourful event posters. The other sponsor was the Faculty of Humanities and Social Sciences, who provided the venue, contributed to the purchase of the photo frames and I was able to give the participating students a gift package at the end of the semester, which they were very happy about. 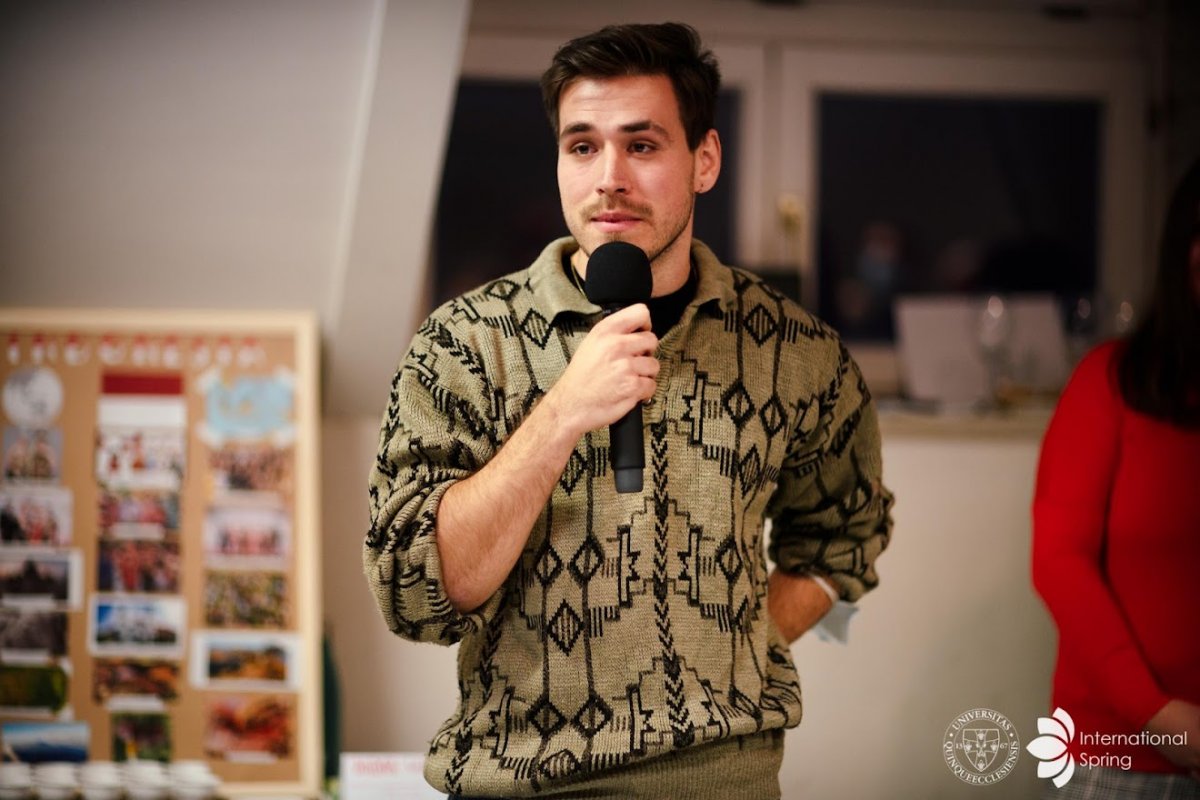 Do you think the event will be organized again?

I have already received this question from many students and colleagues, and some participating students have already pre-registered that they would like to participate in such an event next time. Students from other nationalities have also indicated that their culture could be included in a future event. So, yes, I would like to organise more similar events in the future and possibly create a tradition with Intercultural Encounters. I really enjoyed working creatively with the students. According to the participants and guests, it was very nice to get away from everyday life for such a fun, diverse cultural knowledge transfer event.

Dr. Adrienn Fekete was born in Pécs and has spent a significant part of her academic and professional career in Pécs and at UP. After majoring in English and History at the Faculty of Humanities, University of Pécs, she spent a year as a scholarship student at the American University in Bulgaria. She studied Translation and Interpretation at the Medical School, followed by studying in the Applied Linguistics Doctoral Programme of UP. Currently, she is an assistant lecturer and researcher in the Department of Applied Linguistics at the Institute of English Studies. Her main research interests include linguistic and cultural identity in language learning and the psychological factors of language learning. She also teaches intercultural communication and drama-based teaching methodology. In her courses, she emphasises empirical learning, the development of personality, skills and communication, and the identification of students' strengths and talents. She believes that this can best be achieved in a relaxed classroom atmosphere. 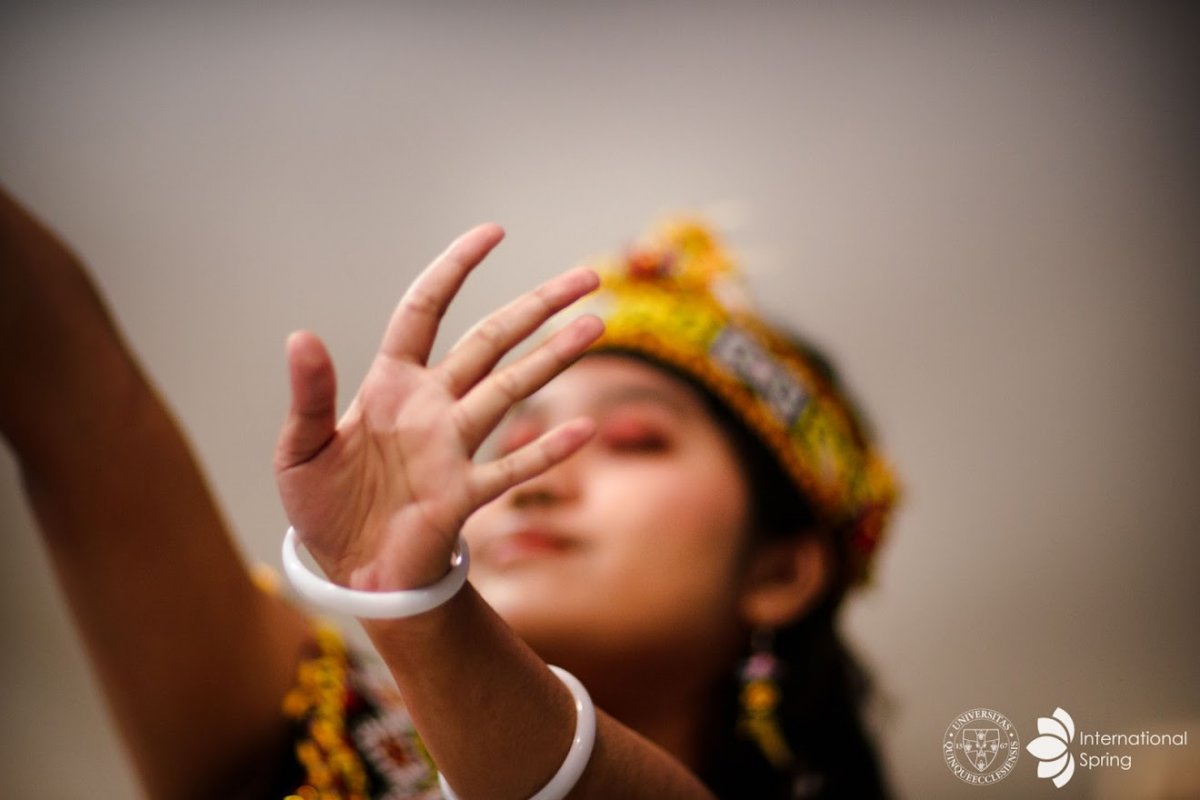 EDUC – Internationalization is Natural for Universities

Information for students fleeing the war in Ukraine

Senate of UP Re-Elected Attila Miseta as Rector

The Presidency of Danube Rectors' Conference stands with Ukraine

“Bring it Back, Bro’!” - Spring Campaign