The organisers of the recently concluded Educatio national higher education exhibition asked six internationally renowned Hungarians to provide some kind of guidance for those about to be admitted. György Buzsáki, alumnus and honorary doctor of the University of Pécs was especially dear to us among them. He delivered his message from his office to the applicants - in the background was the UP robe that the professor received from his alma mater when he was awarded the honoris causa prize, which for those who recognized it, meant so much. The following article is a summary of the video message from Professor György Buzsáki. 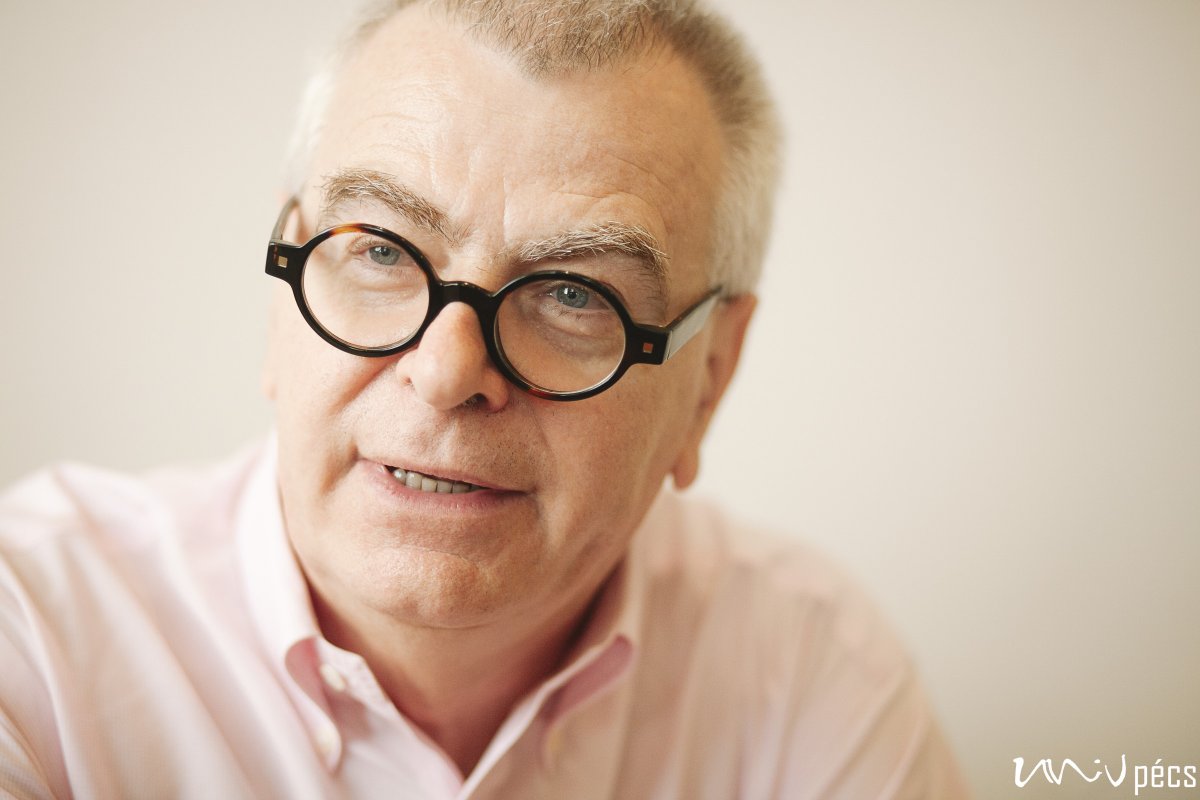 There are two things you need as you begin your transition to adulthood. The first is to find out what is the profession, career or occupation that you would be happy and enthusiastic to do. The second is that the direction you choose should also provide some kind of livelihood. The rest will take care of itself.

The first step, a process of self-discovery, really kicks in during this period when you choose your career. The next 4-5 years will determine your whole career path, whether you decide to continue studying or not. It is no secret, as I am sure you know this already, or at least have thought about it. But what you may not have thought about is that this is the period when you have to do everything at once: study, study, study, get good results in your exams, but at the same time have fun, go on trips, travel, play sports, fall in love and so on. All of this while there are only 24 hours in a day. There is no recipe for the right schedule, you have to find it individually. You are now going to learn that the navigating process of life is a series of choices and compromises.

It is during this period that the awakening brain asks itself the really big questions: what is the purpose and meaning of life, and where do we find the answers?

Imre Madách gives us a starting point when he says in The Tragedy of Man: 'the purpose of life is the struggle itself'. You are probably thinking that this is a meaningless philosophy, because what is the point of living if life is nothing but a constant struggle. That is what I thought at your age. I slowly realised that if you want to become a scientist in order to get your Nobel Prize, you are doomed to fail from day one. If your career as an athlete is all about Olympic gold, you will probably never win a medal. If you can only imagine your happiness in riches, you are doomed to failure. Why? Because the path to your goals is relentless, full of suffering - or so it may seem, since the reward comes very late, if at all.

However, if we reframe Madách's thoughts a little and start to understand that if the goal of our work and efforts should be to help our fellow human beings, and we learn to rejoice in the happiness of others, then it is easy to see each day as a success. If everyone had this attitude to life - and that is the only way! - then everyone would win. The common goal cannot be the constant defeat of others, the constant pushing others away, because then we will all be losers.

However, if in a good community we do win from time to time, it feels especially good because others will celebrate with us. 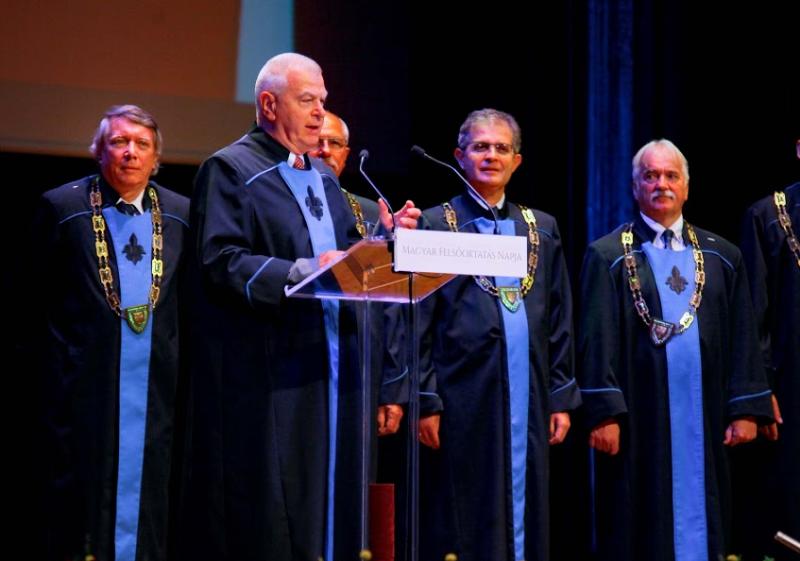 With this attitude, the message of Madách sounds a bit different, does it not? Perhaps he just chose the wrong word.

Perhaps we should use the term 'doing good', 'contribution' or 'helping' instead of 'fighting', and then we would not be talking about the tragedy of man, but about the happiness of mankind.

The point - at least for me - is that we do our daily business with integrity, then in time we will realise that what we call struggle is actually a duty and a task, in other words, everyday real life, which let us admit it - is not so bad.

Those who seek their own purpose, their own meaning in life, are doomed to suffering and unhappiness, because in biology there is no individual purpose or meaning, our individual meaning of existence exists only in the reflection of others. It is worth thinking about this a little now, here on the threshold of your career choices.

We humans are a very strange species. Any dog, whether in Hungary or anywhere else in the world, has roughly the same canine repertoire, which means that the knowledge of individual dogs does not differ much from the overall knowledge of the dog-world, or ‘doghood’, so to speak. This is true for all species of animals - except us, homo sapiens.

My individual contribution to the complex body of knowledge of humanity is ridiculously insignificant, and unfortunately this gap is growing every day compared to the total knowledge of our species. Today, this sum of knowledge exists in a virtual world, on the Internet, and is - in principle - accessible to all.

I used to go to the library when I was in my twenties, collecting material to find and read articles and books that satisfied my curiosity. Weeks, months, years of work would nowadays be reduced to hours or even minutes if I wanted to repeat my past achievements. But this is no longer enough today, as the virtual knowledge base is growing at an even faster pace. That does not sound like a good argument, does it? But wait, human history can be broken down into a few accelerating phases. In the biological phase, we lived in small groups over hundreds of thousands of years. Then, with the emergence of urban life, we changed our organisation, our division of labour, we arrived at a second, so-called thinking phase, building objects and tools to externalise the knowledge of the brain - we systematised measuring devices such as the clock, we shared our knowledge through books. Then in the last century, this process accelerated incredibly, and as we moved into the 21st century, your century, we entered a new era, the era of information and communication.

Most of our knowledge is outside our brains and the internet has become the new agora of the world. This is an unstoppable and irreversible process, which, along with its benefits, also brings with it serious problems.

It is fair to say that the benefits of major technological innovations are shared by all without exception, just not equally - and it is this inequality that is at the root of the growing divide between town and village, between cultured and less cultured people, and the resulting political polarisation that is present worldwide.

And it is in this new world that you must now adapt and learn how to turn sour lemons into sweet lemonade. The solution I propose to this challenge, if you accept it, is to continue your education. A small nation, like us Hungarians, can best excel in the world through knowledge.

In Hungary, every opportunity to achieve knowledge is given. It is a tragicomic joke in the US that the main motivator for contraception is the cost of higher education. This means that the average person cannot afford the cost of educating three or more children. In contrast, higher education in Hungary is - almost - free. The country has excellent universities with excellent teachers - these are the special people we can look up to and treasure as examples. I wanted to be an electrical engineer almost until my last days in secondary education, but somehow I ended up in medical school. There I met my future master (professor Endre Grastyán – the ed.), whose first lecture was on the effects of motivation on the nervous system. Instantly, he gave me a direction in life. I am sure that you will have or have had such defining moments in your lives, and that you will find a master whose example will show you the way.

Your worldview, your philosophy of life, will be finally shaped over the next few years. It is a well-known scientific fact that the twentysomething brain becomes more balanced, an adult. It is very rare for a mature person's philosophy of life, or even religious beliefs, to change radically later in life. I still think about the big issues today as I did when I was a student.

Consider your university years a gift from heaven.

It is when new lifelong friendships are formed, your mind is shaped, wiser, and helps you find your way in an increasingly complex world. And the country needs a new, more sophisticated generation. So your interests are everyone's interests.

I wish you every success in this process!"

EDUC – Internationalization is Natural for Universities

Information for students fleeing the war in Ukraine

Senate of UP Re-Elected Attila Miseta as Rector

The Presidency of Danube Rectors' Conference stands with Ukraine

“Bring it Back, Bro’!” - Spring Campaign

Easing Restrictions at UP