The Academic Year 2017/2018 was officially closed at the Ceremonial Senate Meeting at the Dr. József Halasy-Nagy Aula. Several awards have been conferred, as well as honorary professor, assistant professor and professor titles, habilitated doctoral titles and doctoral titles. With the hopes of establishing a new tradition, the incoming rector took his ceremonial oath in the presence of former rectors of UP and predecessor institutions.

The mandate of Dr. József Bódis is going to end with 30 June 2018, therefore the Ministry of Human Capacities invited applications to fill the position of rector of the University of Pécs. At the The Senate Meeting held to elect the new rector, Dr. Attila Miseta, has won the majority of the votes, and he has been nominated on behalf of the university to the Ministry of Human Capacities for the highest governing position of UP. Dr. Attila Miseta was officially appointed by János Áder, the President of Hungary to fill the prestigious position in the period 1 July 2018 – 30 June 2022. 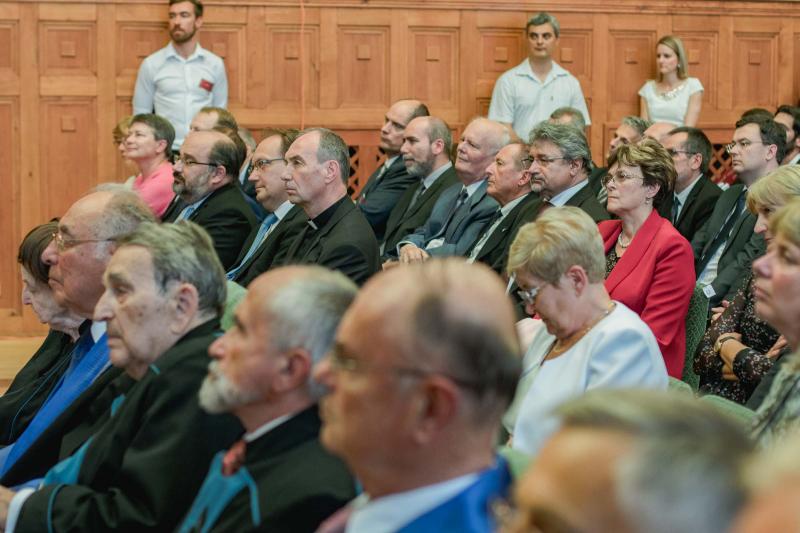 The history of the university is a history of rectorial periods, of leaders, who have promoted the diverse, value creating and high quality higher education in Pécs in the previous decades. The first time in the history of the University of Pécs, with the hopes to establish a tradition, the new rector took his official oath and received the rectorial symbols in the presence of former rectors of the University of Pécs and its predecessor institutions.

József Bódis, the outgoing rector quoted from the foundation speech of the 651-year-old University of Pécs, and highlighted that the Hungarian higher education was born in Pécs. He emphasized that the aspiration to achieve high quality has always been characteristic for the university life. He shortly summarized his two cycles as a rector, accentuating the role of developments, and thanked all of his colleagues for their support during this eight-year period. Finally, he wished the new rector success and good luck: “Their success is our success as well.” 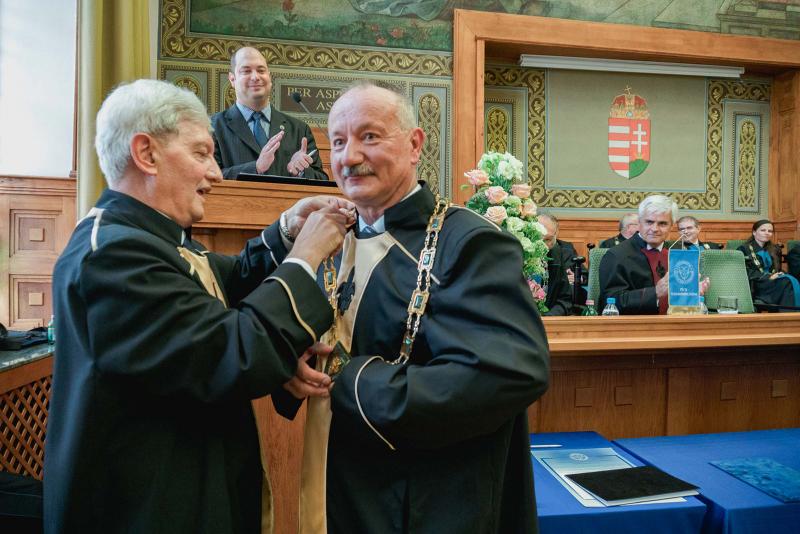 Following the speech of the rector, rector emerita and rector emeritus titles, doctoral titles and other official titles have been awarded.

At the end of the ceremony, the new rector, Dr. Attila Miseta received the symbols (the robe and the livery collar) of the rector from Dr. József Bódis, and took the oath in Latin lead by Dr. Miklós Bauer, former rector of one of the predecessor institutions of the University of Pécs, the Pécs Medical University (1985-1991, 1995-1997).

“Everything for the University of Pécs! - Omnia pro Universitate Quinqueecclesiensis!” 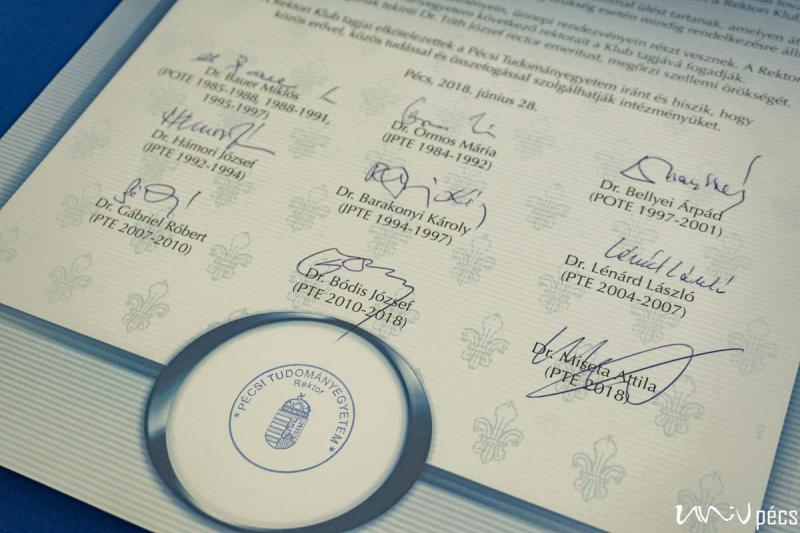 The former rectors of the current and predecessor institutions founded the Rectors’ Club of the University of Pécs. The incoming rector gave a speech to close the academic year 2017/2018. He emphasized that the congratulations are not yet in order, would rather have them at the end of the four-year period. He said, that he expects the talented people connected to this region to help the university, he also hinted at the appointment of József Bódis as Minister of State for Education, thereby hoping that the University of Pécs would be well-represented in the government. “We can only gain advantage by maintaining a good and constructive relationship with everyone in this region.”

The new rector plans to devote the following couple of months to in depth consultations, possibly followed by some changes. He asked everyone to be brave in their positions, since nobody will have any problems, because they made a mistake. He does not plan on downsizing; he would rather expand the university, because of the growing number of students. “Currently, we have 4400 international students, hoping there could be five thousand in the near future.” Closing his speech, he asked for the constructive criticism of his colleagues.