In Asia, so in Korea as well, if somebody gives a calligraphy written by him/herself as a gift to someone, it presents the writer’s deepest respect and the best feelings from her/his heart. It is for the reason that in the asian cultures the calligraphy is not only the technical practise of the penmanship but the training and discipline of the mind. The ancient east calligraphy is a part of the visual art, where – opposite of the west – they still write with brush. While in the West the letters are considered to be the source of aesthetic pleasure, so letters want to catch the eye (so that there is a huge attention on the letters’ perfect beauty), the calligraphers of the Far East countries present their own feelings in the formes of the characters.

Calligraphy turns this way into a particular, subjective art, that used to call the „silent way of the word”, where korean calligraphy walks on its special path. Korean calligraphers use two different kind of fonts. One of them is the hanja, based on the chinese characters. The other is the hangul from the age of Sejong. Within the two fonts there are numerous style in use.

There is an old, korean saying: 문방사우, that means: „the four treasures of the work room”. These four treasures could not been missed from any of the cultivated families homes. This saying refers to even for the four best friends of the calligrapher: brush, paper, ink stone, ink sticks and we can recognize the innermost point of calligraphy with them. 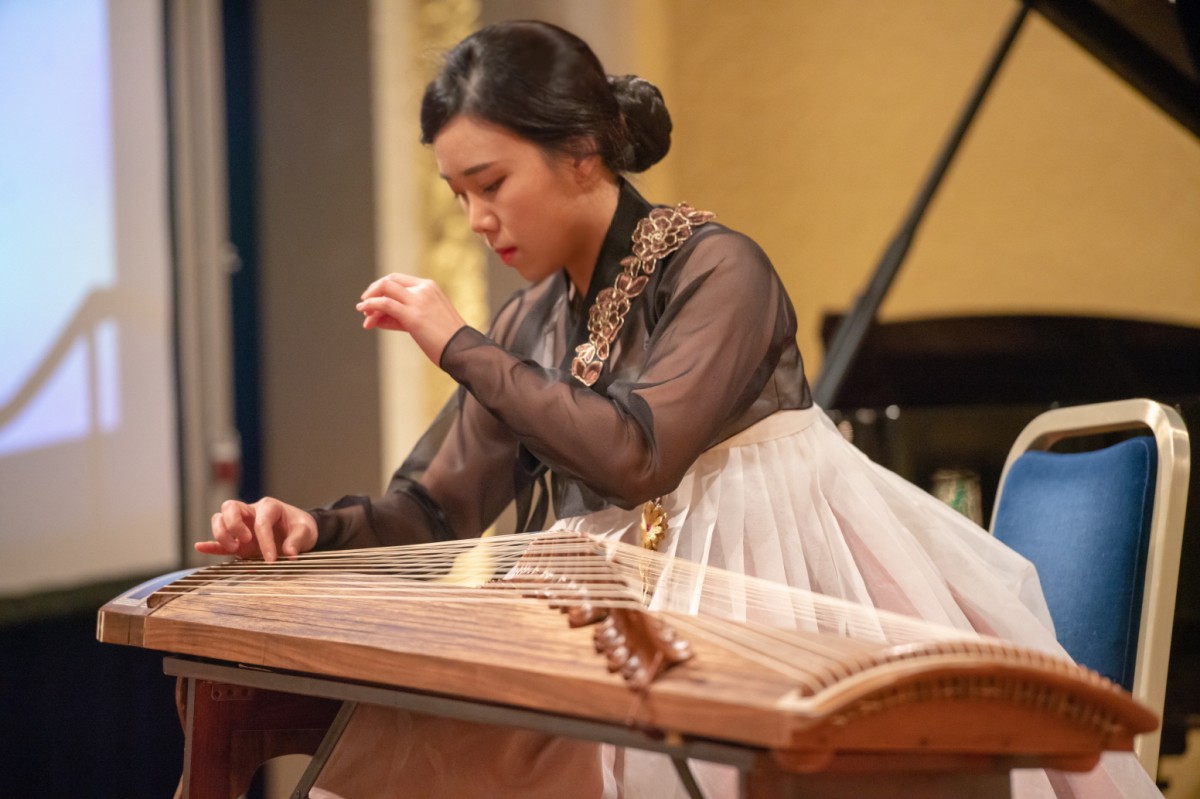 Gayageum (가야금) is one of the Korea’s well-known traditional string instruments, with the 12 strings made of twisted silk thread. You should pluck or strums the strings directly to make sound, which is very rare among the Asia’s string instruments. This way of playing -player’s direct touch with the silk strings- contributes to creating unique, yet much more humane and natural sound, which in turn makes people feel very calm and comfortable while listing to it. No wonder that Gayageum music is getting more and more loved by the wide range of audience across the world.

This evening, you will have an opportunity to experience this! Park Minji, a professional Gayageum player from Korea, is going to present a Gayageum Solo Concert for the audiences in Pecs. Park Minji, who has completed the M.F.A. degree program at the Korea National University of Arts, is currently based in Berlin, while teaching at the Korean Cultural Center in Berlin and giving concerts in Europe, such as at the Composer Isang Yun Memorial House’s Opening concert (Berlin) and Younger Korean Artists Concert (Hamburg), among others. She’ll show audiences the diverse aspect of Gayageum with the program that includes the traditional as well as contemporary repertoire for Gayageum.